Join Us At Oktoberfest

This may be what the Concordia Club is most known for today!

Concordia is Canada´s 'Home' of Oktoberfest. With a seating capacity of close to 4,000, Concordia has established the second-largest Oktoberfest in the world right here in Kitchener Waterloo. It's been a resounding success story from day one!

Tickets will be available for purchase online through our website with a link to Eventbrite in the Tent, Main Hall and Schenke Restaurant with live entertainment in all three locations. 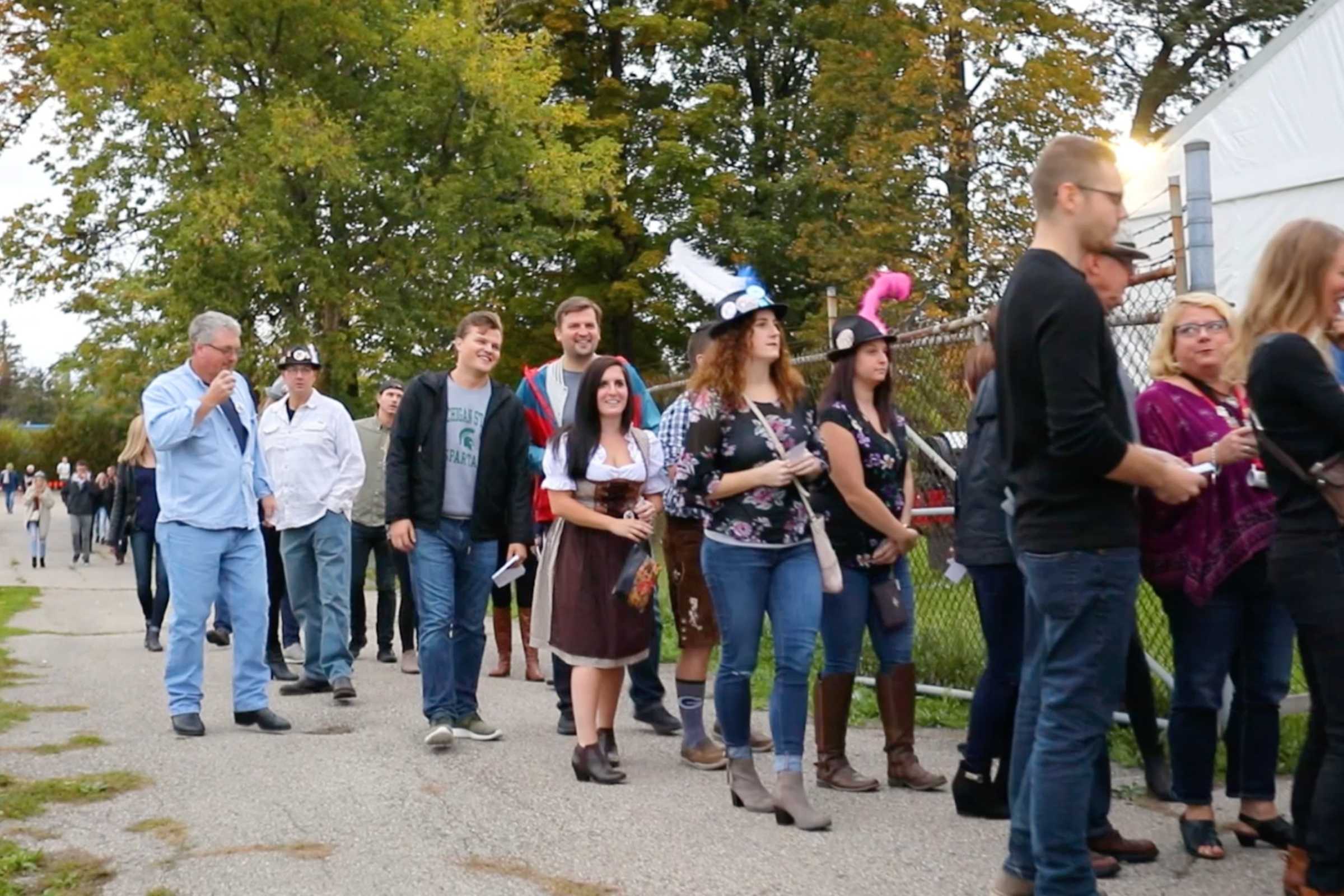 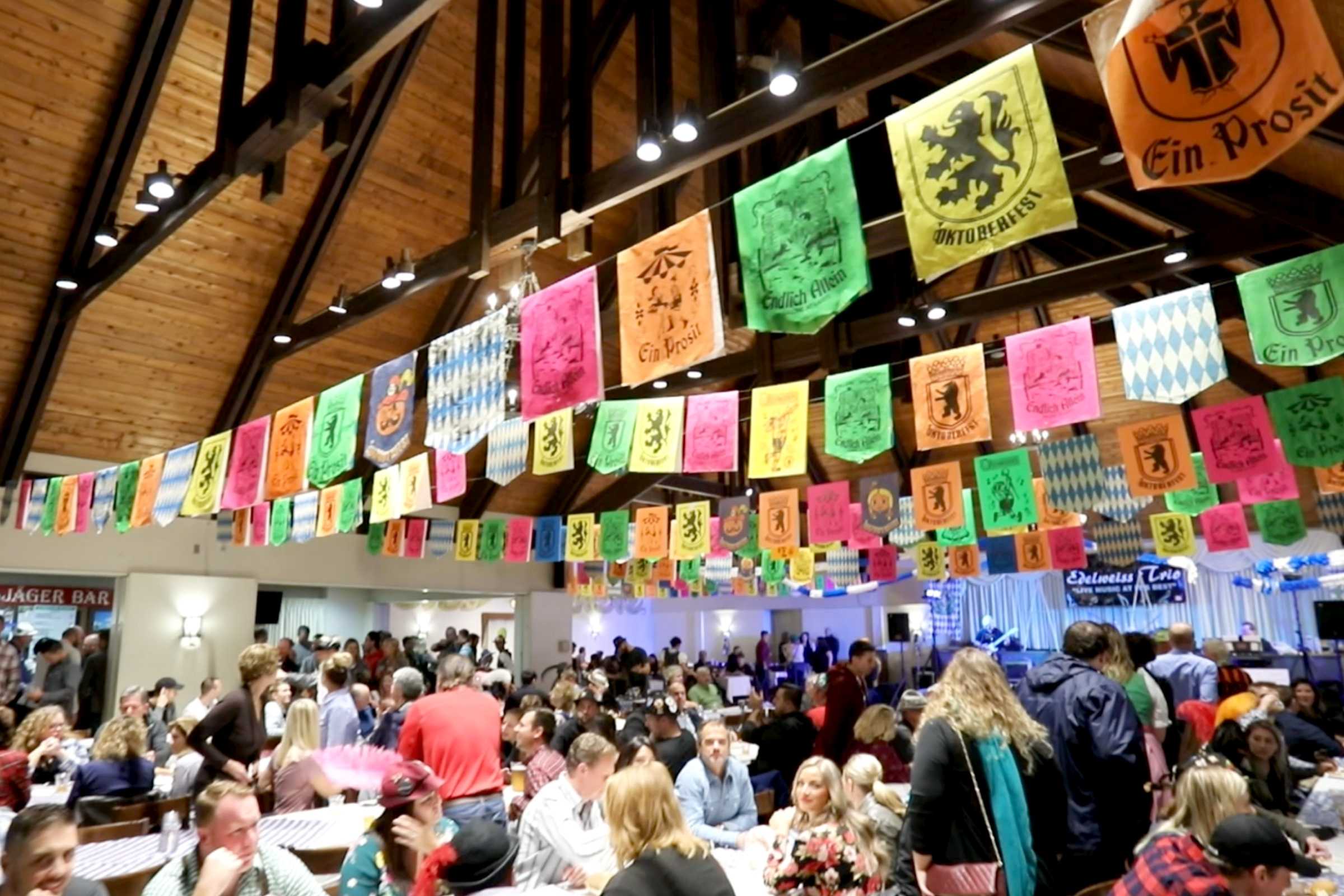 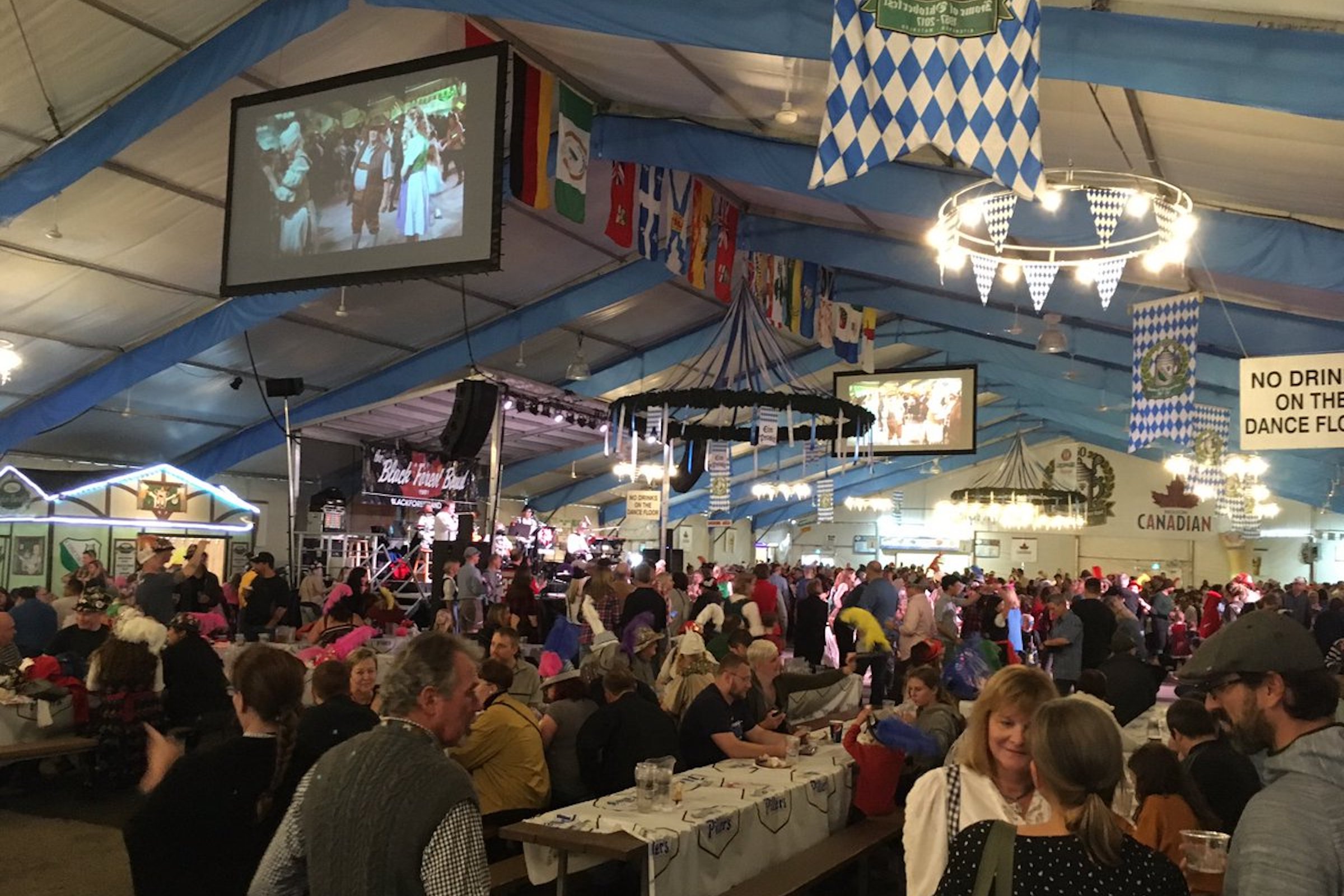 A unique dining experience that is fun for the whole family.

Oktoberfests have been celebrated in Canada for a long time, not least at the Concordia Club, by holding annual dances. Brass band music, folkdance demonstrations and “Bratwursts” with “Sauerkraut” were an integral part of these celebrations. Oktoberfest 1967 however was totally different. As Concordia’s contribution to Canada’s 100th birthday, our President Ren Ghirincelli and manager Julius Rauchfuß organized a four day festival, complete with beer tent, several orchestras, a shooting booth, souvenir sales, “Lederhosen” and “Dirndlkleider”. The atmosphere and the thereby generated income were second to none. All profits were donated to two organizations “Big Brothers” and the “Multiple Sclerosis Society”.

The celebrations had left such a positive impression in the city that it came to the notice of the chamber of commerce. The decision was taken to organize a city-wide Oktoberfest and “Oktoberfest Incorporated” was created. The four German speaking Clubs, Concordia, Schwaben, Transylvania and Alpenclub, together with the entrepreneur Jonas Bingeman, were the foundation of this enterprise and its first president elect was the president of Budd Canada, Darwin Clay. 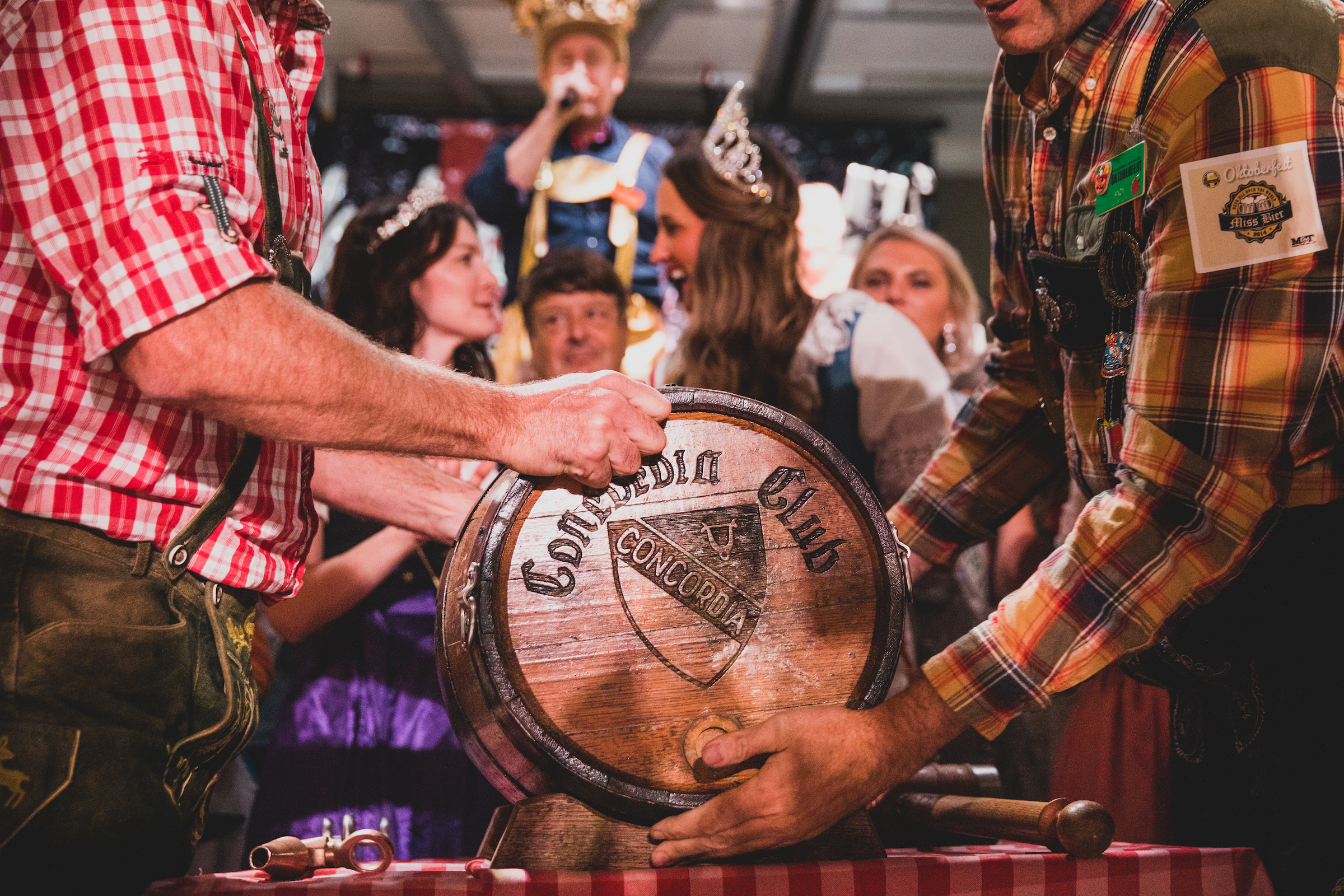 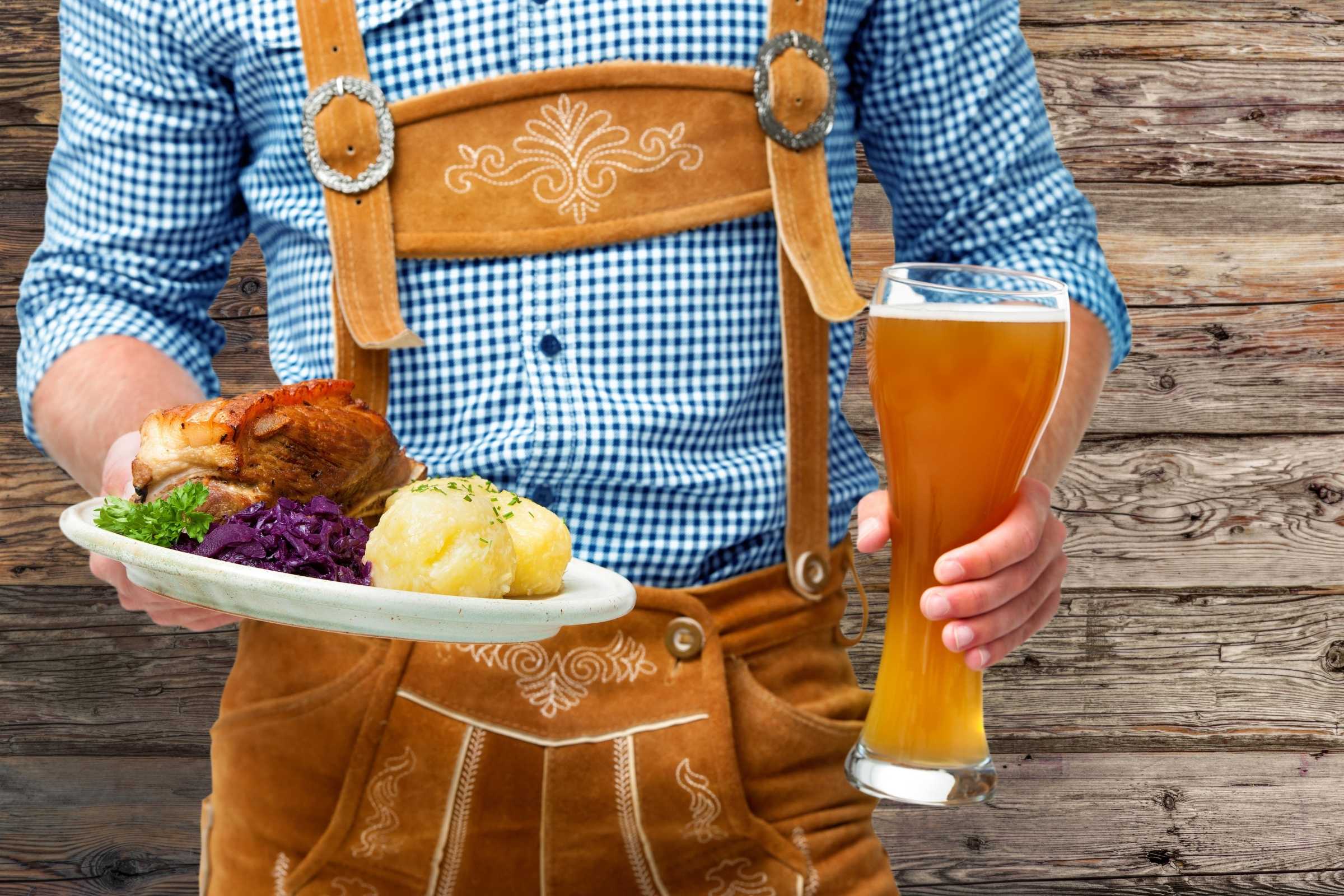 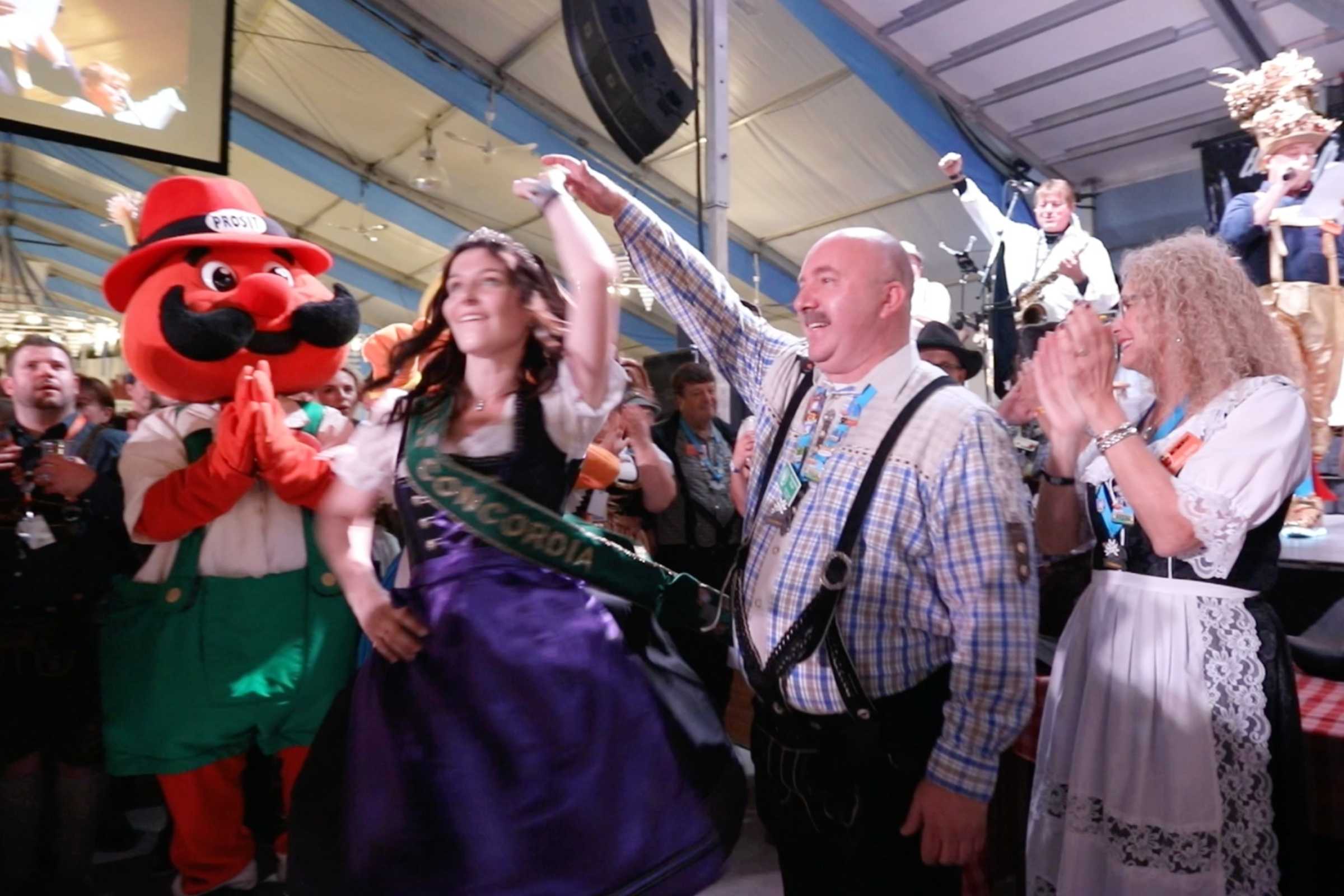 The Concordia Oktoberfest grew alongside the other festivities. There was hardly a year when the facilities were not enlarged or improved. A particular problem presented itself in the form of a shortage of toilet facilities. One of the board members, Erwin Weiler, found a solution. Two freight trailers were placed behind the tents and converted to modern toilets, which served their purpose well for 25 years. In 1994, under President Horst Allmendinger, the board decided to build permanent washroom facilities.

During the second year of Oktoberfest celebrations, a second tent was erected. However, the number of guests was so great that before long a third, fourth and fifth tent followed. This had drawbacks because wherever tents were placed beside each other, wooden pegs and ropes barred the way. Whenever it rained, torrents of water would cascade downwards between the tents. This did not seem to impede the festive mood of visitors from this region and from far away, and thousands enjoyed the Oktoberfest at the Concordia Club.

The ability of the Concordia Club to present the festival with authenticity, even though this led to increased expenses, made it the most popular “Festhalle” of all. Concordia’s Tanzdeel folk dance group, the “Schuhplattlergruppe” and the brass band contributed substantially to the success. The Concordia band in the tent, consisting of Concordia members under the direction of Nick Osbelt, provided all the Bavarian “Urwüchsigkeit” required for the occasion. It became the most popular orchestra in the city.

HomeEventsRestaurantMake a ReservationWeddingsLegalSite Map
We use cookies on our website to give you the most relevant experience by remembering your preferences and repeat visits. By clicking “Accept”, you consent to the use of all the cookies.
Cookie SettingsAccept
Manage Consent

This website uses cookies to improve your experience while you navigate through the website. Out of these, the cookies that are categorized as necessary are stored on your browser, as they are essential for the working of basic functionalities of the website. We also use third-party cookies that help us analyze and understand how you use this website. These cookies will be stored in your browser only with your consent. You also have the option to opt-out of these cookies. However, opting out of some of these cookies may affect your browsing experience.
Necessary Always Enabled
Necessary cookies are absolutely essential for the website to function properly. These cookies ensure basic functionalities and security features of the website, anonymously.
Functional
Functional cookies help to perform certain functionalities like sharing the content of the website on social media platforms, collect feedbacks, and other third-party features.
Performance
Performance cookies are used to understand and analyze the key performance indexes of the website which helps in delivering a better user experience for the visitors.
Analytics
Analytical cookies are used to understand how visitors interact with the website. These cookies help provide information on metrics the number of visitors, bounce rate, traffic source, etc.
Advertisement
Advertisement cookies are used to provide visitors with relevant ads and marketing campaigns. These cookies track visitors across websites and collect information to provide customized ads.
Others
Other uncategorized cookies are those that are being analyzed and have not been classified into a category as yet.
SAVE & ACCEPT
Contents © Concordia Club
Created by Gecko Websites
0
0
Your Cart
Your cart is emptyReturn to Shop
Continue Shopping